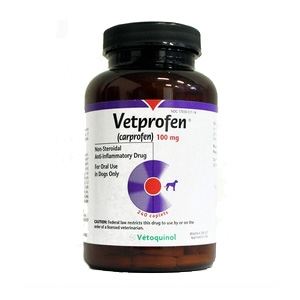 Call us for Product Inquiry

Vetprofen (carprofen) 100 mg, 240 Caplets pet meds are effective at relieving joint pain in dogs associated with degenerative joint diseases like osteoarthritis or hip dysplasia in dogs. Carprofen is a non-steroidal, anti-inflammatory drug (NSAID) is in the same class as ibuprofen, naproxen, and ketoprofen.

This dog medicine by Belcher Pharmaceuticals, LLC is for oral use in dogs only

You can order the anti-inflammatory drug and other veterinary medicines for dogs at our online pet meds shop. At our Texas based pet pharmacy online, we offer discount veterinary medications.

Federal law restricts this pet medicine to use by or on the order of a licensed veterinarian.

Vetprofen for dog is a non-steroidal anti-inflammatory drug (NSAID) of the propionic acid class that includes ibuprofen, naproxen, and ketoprofen. Carprofen is the nonproprietary designation for a substituted carbazole, 6-chloro-α-methyl-9H-carbazole-2-acetic acid.

Carprofen is a white, crystalline compound. It is freely soluble in ethanol, but practically insoluble in water at 25°C.

Carprofen is a non-narcotic, non-steroidal anti-inflammatory agent with characteristic analgesic and antipyretic activity approximately equipotent to indomethacin in animal models.

The mechanism of action of carprofen, like that of other NSAIDs, is believed to be associated with the inhibition of cyclooxygenase activity.

Vetprofen, dog medication for pain should not be used in dogs exhibiting previous hypersensitivity to carprofen.

Keep out of reach of children. Not for human use. Consult a physician in cases of accidental ingestion by humans.

For use in dogs only. Do not use in cats.

All dogs should undergo a thorough history and physical examination before initiation of NSAID therapy.

Appropriate laboratory tests to establish hematological and serum biochemical baseline data prior to, and periodically during, administration of any NSAID should be considered.

Owners should be advised to observe for signs of potential drug toxicity.

As a class, cyclooxygenase inhibitory NSAIDs may be associated with gastrointestinal, renal and hepatic toxicity. Effects may result from decreased prostaglandin production and inhibition of the enzyme cyclooxygenase which is responsible for the formation of prostaglandins from arachidonic acid.

When NSAIDs inhibit prostaglandins that cause inflammation they may also inhibit those prostaglandins which maintain normal homeostatic function. These anti-prostaglandin effects may result in clinically significant disease in patients with underlying or pre-existing disease more often than in healthy patients.

NSAID therapy could unmask occult disease which has previously been undiagnosed due to the absence of apparent clinical signs. Patients with underlying renal disease for example, may experience exacerbation or decompensation of their renal disease while on NSAID therapy.
The use of parenteral fluids during surgery should be considered to reduce the potential risk of renal complications when using NSAIDs perioperatively.

Carprofen is a non-steroidal anti-inflammatory drug, and as with others in that class, adverse reactions may occur with its use. The most frequently reported effects have been gastrointestinal signs. Events involving suspected renal, hematologic, neurologic, dermatologic, and hepatic effects have also been reported. Patients at greatest risk for renal toxicity are those that are dehydrated, on concomitant diuretic therapy, or those with renal, cardiovascular, and/or hepatic dysfunction. Concurrent administration of potentially nephrotoxic drugs should be approached cautiously, with appropriate monitoring. Concomitant use of Vetprofen for dog with other anti-inflammatory drugs, such as other NSAIDs or corticosteroids, should be avoided because of the potential increase of adverse reactions, including gastrointestinal ulcerations and/or perforations.

Sensitivity to drug-associated adverse effects varies with the individual patient. Dogs that have experienced adverse reactions from one NSAID may experience adverse reactions from another NSAID. This veterinary medicines treatment was not associated with renal toxicity or gastrointestinal ulceration in well-controlled safety studies of up to ten times the dose in healthy dogs.

Carprofen is not recommended for use in dogs with bleeding disorders (e.g., Von Willebrand’s disease), as safety has not been established in dogs with these disorders. The safe use of carprofen in animals less than 6 weeks of age, pregnant dogs, dogs used for breeding purposes, or in lactating bitches has not been established. Studies to determine the activity of carprofen when administered concomitantly with other protein-bound or similarly metabolized drugs have not been conducted. Drug compatibility should be monitored closely in patients requiring additional therapy.

Such drugs commonly used include cardiac, anticonvulsant and behavioral medications. It has been suggested that treatment with carprofen may reduce the level of inhalant anesthetics needed.

If additional pain medication is warranted after administration of the total daily dose of carprofen, alternative analgesia should be considered. The use of another NSAID is not recommended. Consider appropriate washout times when switching from one NSAID to another or when switching from corticosteroid use to NSAID use.

Vetprofen, like other drugs of its class – non-steroidal anti-inflammatory drug, is not free from adverse reactions. Owners should be advised of the potential for adverse reactions and be informed of the clinical signs associated with drug intolerance. Adverse reactions may include decreased appetite, vomiting, diarrhea, dark or tarry stools, increased water consumption, increased urination, pale gums due to anemia, yellowing of gums, skin or white of the eye due to jaundice, lethargy, incoordination, seizure, or behavioral changes.

Serious adverse reactions associated with this drug class can occur without warning and in rare situations result in death. Owners should be advised to discontinue Vetprofen for dog and contact their veterinarian immediately if signs of intolerance are observed.

The vast majority of patients with drug related adverse reactions have recovered when the signs are recognized, the drug is withdrawn, and veterinary care, if appropriate, is initiated. Owners should be advised of the importance of periodic follow up for all dogs during administration of any NSAID.

During investigational studies of osteoarthritis in dogs with twice daily administration of 1 mg/lb, no clinically significant adverse reactions were reported. Some clinical signs were observed during field studies (n=297) which were similar for carprofen- and placebo-treated dogs. Incidences of the following were observed in both groups: vomiting (4%), diarrhea (4%), changes in appetite (3%), lethargy (1.4%), behavioral changes (1%), and constipation (0.3%). The product vehicle served as control.

There were no serious adverse events reported during clinical field studies of osteoarthritis in dogs with once daily administration of 2 mg/lb. The following categories of abnormal health observations were reported. The product vehicle served as control.

During investigational studies of surgical pain for the caplet formulation, no clinically significant adverse reactions after use of this non-steroidal anti-inflammatory drug were reported. The product vehicle served as control.

* A single dog may have experienced more than one occurrence of an event Post-Approval Experience:

Always provide Client Information Sheet with prescription. Carefully consider the potential benefits and risk of Vetprofen and other treatment options for degenerative joint diseases that cause joint pain in dogs and inflammation in the joints before deciding to use Vetprofen for dog. Use the lowest effective dose for the shortest duration consistent with individual response. The recommended dosage of these dog medicines for oral administration is 2 mg/lb (4.4 mg/kg) of body weight daily. The total daily dose may be administered as 2 mg/lb of body weight once daily or divided and administered as 1 mg/lb (2.2 mg/kg) twice daily. For the control of postoperative pain, administer approximately 2 hours before the procedure. Caplets are scored and dosage should be calculated in half-caplet increments.

Confirmation of the effectiveness of carprofen for the relief of joint pain in dogs associated with osteoarthritis in dogs, and for the control of postoperative pain associated with soft tissue and orthopedic surgeries was demonstrated in 5 placebo-controlled, masked studies examining the anti-inflammatory and analgesic effectiveness of carprofen caplets in various breeds of dogs.

Separate placebo-controlled, masked, multicenter field studies confirmed the anti-inflammatory and analgesic effectiveness of carprofen caplets when dosed at 2 mg/lb once daily or when divided and administered at 1 mg/lb twice daily. In these two field studies, osteoarthritis in dogs showed statistically significant overall improvement based on lameness evaluations by the veterinarian and owner observations when administered carprofen at labeled doses.

Separate placebo-controlled, masked, multicenter field studies confirmed the effectiveness of carprofen caplets for the control of postoperative pain when dosed at 2 mg/lb once daily in various breeds of dogs. In these studies, dogs presented for ovariohysterectomy, cruciate repair and aural surgeries were administered carprofen preoperatively and for a maximum of 3 days (soft tissue) or 4 days (orthopedic) postoperatively. In general, dogs administered carprofen showed statistically significant improvement of joint pain in dogs scores compared to controls.

Two of 8 dogs receiving 10 mg/lb orally twice daily (10 times the recommended total daily dose) for 14 days exhibited hypoalbuminemia. The mean albumin level in the dogs receiving this dose was lower (2.38 g/dL) than each of 2 placebo control groups (2.88 and 2.93 g/dL, respectively). Three incidents of black or bloody stool were observed in 1 dog. Five of 8 dogs exhibited reddened areas of duodenal mucosa on gross pathologic examination. Histologic examination of these areas revealed no evidence of ulceration, but did show minimal congestion of the lamina propria in 2 of the 5 dogs.

In separate safety studies lasting 13 and 52 weeks, respectively, dogs were administered orally up to 11.4 mg/lb/day (5.7 times the recommended total daily dose of 2 mg/lb) of carprofen pet med. In both studies, the drug was well tolerated clinically by all of the animals. No gross or histologic changes were seen in any of the treated animals. In both studies, dogs receiving the highest doses had average increases in serum L-alanine aminotransferase (ALT) of approximately 20 IU. In the 52 week study, minor dermatologic changes occurred in dogs in each of the treatment groups but not in the control dogs. The changes were described as slight redness or rash and were diagnosed as non-specific dermatitis. The possibility exists that these mild lesions were treatment related, but no dose relationship was observed.

Clinical field studies were conducted in 297 dogs of different breeds undergoing orthopedic or soft tissue surgery. Dogs were administered 2 mg/lb of carprofen two hours prior to surgery then once daily, as needed for 2 days (soft tissue surgery) or 3 days (orthopedic surgery). Carprofen was well tolerated when used in conjunction with a variety of anesthetic-related drugs. The type and severity of abnormal health observations in carprofen- and placebo-treated animals were approximately equal and few in number.

The most frequent abnormal health observation was vomiting and was observed at approximately the same frequency in carprofen- and placebo-treated animals.

Changes in clinicopathologic indices of hematopoetic, renal, hepatic, and clotting function were not clinically significant. The mean post-treatment serum ALT values were 7.3 IU and 2.5 IU less than pre-treatment values for dogs receiving carprofen and placebo, respectively.

Vetprofen for dogs caplets are scored, and contain 25 mg, 75 mg, or 100 mg of carprofen per caplet. Each caplet size is packaged in bottles containing 60 or 240 caplets.

Be the first to review “Vetprofen (Carprofen)” Cancel reply